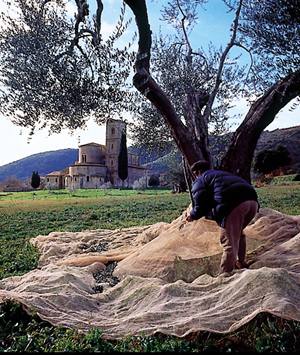 -          Free Form of Pruning with maximum Reduction of Labour

-           Effective Disease (Phytosanitary) and Weed Control, with a choice of Chemical,

-           Programming and Control of Irrigation and Fertilization Systems

The most important aspect of olive growing for the future involves the perfecting of basic systems and techniques: pruning, fertilization, phytohealth defences, mechanisation, and above all the creating of new systems according to more modern and rational agronomic criteria. 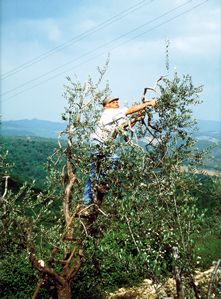 This is the phase that will meet with the greatest number of problems over the next few years due to high costs and the growing scarcity of skilled labour capable of carrying out this important and equally delicate operation. Modern-day criteria suggest the pruning of olive trees in a less aggressive manner than in the past. Excessive pruning in fact causes the plant to shift its own biological equilibrium towards the differentiation between "leaf" buds and "flower" buds, thus contributing towards the so-called "alternation" in production that represents one of the main drawbacks in modern and profitable olive growing.
With the developing of several "clonal selections" of specific varieties, still in the experimental phase, we will eventually finish upwith mechanical and inline pruning, and even non-pruning.

Less pruning is therefore the answer to keeping growing costs down and achieving a superior "olive yield", if combined however, with a suitable and above all "targeted" fertilization. Leaf-fertilization is subsequently taking on a more important role, and while it must not replace in-depth fertilization (or composting), it can often be integrated at extremely low costs compared to the results obtained. With targeted leaf-fertilization based on specific products consisting of active, organic biostimulators (vitamins, enzymes, humic and fulvic acids)
as well as macro and micro elements indispensable for the physiological processes of the tree, surprising results can be obtained at more than acceptable costs, with production increases of up to 100%.
This however, requires intervention during the fundamental phases of the biological phases, and consequently the productive life of the olive tree: vegetative recovery, pre-flowering, setting, hardening of the stone and oil enrichment.

For the complete mechanisation of the olive grove the system must be pre-arranged right from the beginning, with regard to both the choice of cultivars and/or clonal varieties, and the form of plant breeding and arrangement of the installations. With traditional olive growing, (meaning trees already in existence), partial forms of mechanisation can be introduced, with mechanical aids like the vibrating combs which stand out thanks to their ability to double and even triple the quantity of oil produced per-capita per day, with considerable cuts in labour costs as well.


In designing a new plantation it is essential to consider the precocity of entering in production, the high and above all constant productivity, the rationality depending on the ecosystem, and the farm's requirements. After a correct mechanical preparation of the land and an adequate composting of the soil for re-establishing fertility, the choice of the most appropriate varieties and clonal selections according to the environment and climate is without doubt the aspect requiring the greatest care. In fact each variety possesses specific intrinsic, morphological and functional characteristics. For example, every Tuscan olive grower knows that the Leccino variety has a greater resistance to low temperatures than the Frantoio variety, however within the range of certain varieties there are already genetic selections (clones) available on the market that are particularly resistant to certain adverse conditions and phytpathologies, and numerous other varieties are in the process of being studied and/or patented.